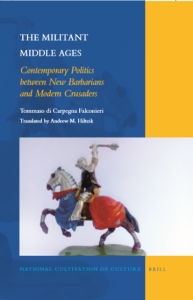 In The Militant Middle Ages, historian Tommaso di Carpegna Falconieri delves into common perceptions of the Middle Ages and how these views shape contemporary political contexts. Today more than ever, the medieval era is mined from across the political spectrum for symbols, examples, allegories, and models to represent and interpret the present. From “new crusades” to fantasy literature and cosplay, from Catholic Traditionalism to environmentalism, from neo-Vikings to medieval tourism and festivals, Carpegna Falconieri leads us in an impassioned and often disquieting journey through the “Modern Middle Ages.” The first book-length study dedicated to the broad phenomenon of political medievalism, The Militant Middle Ages offers a new lens for scrutinizing contemporary society through its instrumentalization of the medieval past.